I’ve been speaking on integrating Python and SQL Server for a while now, and having given the same presentation at nearly a dozen SQL Saturdays, PASS Summit, and multiple user groups, it’s about time to retire my favourite session.  Just in case there’s anyone out there who is interested in the subject but hasn’t managed to see it yet, I thought I’d start sharing some of the code and use-cases in a series of blog posts.

We’ll start off with a simple step-by-step introduction to the sp_execute_external_script stored procedure.  This is the glue that enables us to integrate SQL Server with the Python engine by sending the output of a T-SQL query over to Python and getting a result set back. .  For example, we could develop a stored procedure to be used as a data set in an SSRS report that returns statistical data produced by a Python library such as SciPy.  In this post we’ll introduce the procedure and how to pass a simple data set into and back out of Python, and we’ll get into manipulating that data in a future post.

If you’d like to follow along with me, you’ll need to make sure that you’re running SQL Server 2017 or later, and that Machine Learning Services has been installed with the Python option checked.  Don’t worry if you installed both R and Python, as they play quite nicely together.  The SQL Server Launchpad service should be running, and you should make sure that the ability to execute the sp_execute_external_script procedure is enabled by running the following code:

As with any introduction to a new language, we’re contractually obligated to kick things off with a “Hello, world!”-style script.  You’ll note that our first procedure call below has only two parameters.  The @language parameter says that we’ll be using Python code as opposed to R, and that the Launchpad service should start instantiating the Python engine.   The @script parameter then contains the Python code that we’ll be executing, which in this case is a simple print statement:

Now that we know our Python integration is working, the next step is to send some data over from SQL Server and get it back out.  We specify a T-SQL query to run in the @input_data_1 parameter; the SQL engine will execute this query and send the resulting data set over to Python.  The @script parameter has now been updated to simply say that we will take that data, identified by its default name of InputDataSet, copy it over to OutputDataSet (another default) and then return it to SQL Server.  I’ve got a tally table (a table of sequential numbers) set up in my Admin database, and I’ll begin by just sending across the first ten numbers from that table: 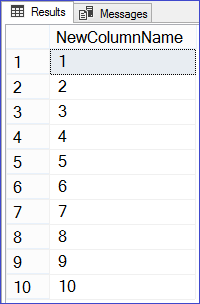 There’s no need to keep the default name of “InputDataSet” for our input data set.  I’m quite partial to “myQuery” myself.  Renaming it is as simple as adding another parameter called @input_data_1_name.  Of course, we have to remember to update the python code in @script to reflect the new name:

Unsurprisingly, we can also change the name of our output data set by adding the @output_data_1 parameter, and updating @script accordingly:

I should pause here to point out that although having parameters named @input_data_1, @input_data_1_name, and @output_data_1_name may imply that we can manage multiple input and output data sets with sp_execute_external_script, that is sadly not the case.  I’m hoping that this naming convention was chosen to allow room for that to happen in a future release (hint, hint, product team!)

Although this input query is very simple, in the real world we might be sending over the output of some very complex queries.  The input query in one of the use cases in the session I’ve been presenting is over 150 lines!  To make this more manageable in our integration, rather than embedding the whole query in our procedure call and making an unholy mess, we’ll instead store it in a variable called @InputQuery and pass that in to @input_data_1.  This allows us to use our standard T-SQL coding style, and has the added effect of being easy to copy-and-paste into a new query window for development and/or, heaven-forbid, debugging.

We can do the same thing with our Python code, which in this example we’ve stored in a variable named @PyScript and then passed in to the @script parameter:

Look at that nice clean procedure call!  Marvel at how the business logic in our T-SQL query and our Python code is separated out, formatted nicely, and ready to copy into another window or IDE!  Can we all now agree to use this format for our sp_execute_external_script calls going forward?

This concludes the end of part one, but we’ll return with part two very soon, in which we start to manipulate our data set in Python and see what happens when things don’t go so well…

I was thinking about algorithms yesterday afternoon – yes, I am a strange one – and one thought led to another and soon I found myself contemplating palindromes – words or phrases that read the same forwards and backwards, such as “racecar” or Napoleon’s famous – albeit apochryphal – “Able was I ere I saw Elba!”  Specifically, I was wondering what would be the most efficient way to test a string’s palindromicity using T-SQL.

Immediately I realized that this algorithm will need to accomplish two different things.  I first need to remove all non-alphabetic characters from the string I am testing, because while “able was I ere I saw Elba” is palindromic even leaving the spaces intact, this will not work for other well-known palindromes such as “A man, a plan, a canal, Panama!”  Then the second task is to check that the remaining string is the same front-to-back as it is back-to-front.

With the help of Elder’s Dead Roots Stirring album I set out to find the most efficient T-SQL code to accomplish this task.  My plan was to avoid resorting to Google for the answer, but perhaps in a future post I will go back and compare my solution to the best one I can find online.  For this first post in the series I will tackle only the first task of removing the non-alphabetic characters from the string.

I’ll readily admit to not being well versed in the use of regular expressions, so in order to meet my Google-free objective I’ll have to find another solution for now.  Let’s start by seeing what we can do with the famed “A man, a plan, a canal, Panama!”  Because I know exactly which characters are in this string, I can use the brute-force method of nested REPLACE() functions to parse them out – see line 11 below.  (You may want to use the Toggle Line Wrap or Open Code In New Window options to see it better.)

Of course I may not always have the luxury of knowing the contents of the string beforehand.  I do know that the characters I want to keep will fall within the range of A-Z (ASCII values 65-90) or a-z (ASCII values 97-122).  My plan is to step through the string one character at a time, but instead of using a WHILE loop, I’ll instead use the tally table (a table of sequential numbers) in my Admin database like so: 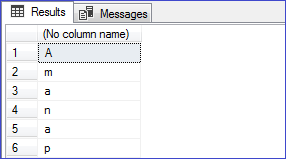 You can put this code into a common table expression and combine it with the second query:

Of course, separate rows for each character don’t help us very much.  Let’s use the CONCAT() function to put them back into a single string:

This method works great to parse a single string, but I will have a whole table of potential palindromes to parse.  Historically, I would usually use the STUFF() function with FOR XML PATH to reassemble the strings like this:

I’ve always found using this method to be a bit non-intuitive and fiddly.  Thankfully SQL Server 2017 has added a new function called STRING_AGG() that we can use instead:

Wow, that’s a lot of queries, so I’ll bring part one of this series to a close.  I look forward to seeing some other solutions in the comments below.  In part two, we’ll compare the performance of these methods across both a single string, and a whole table of them!